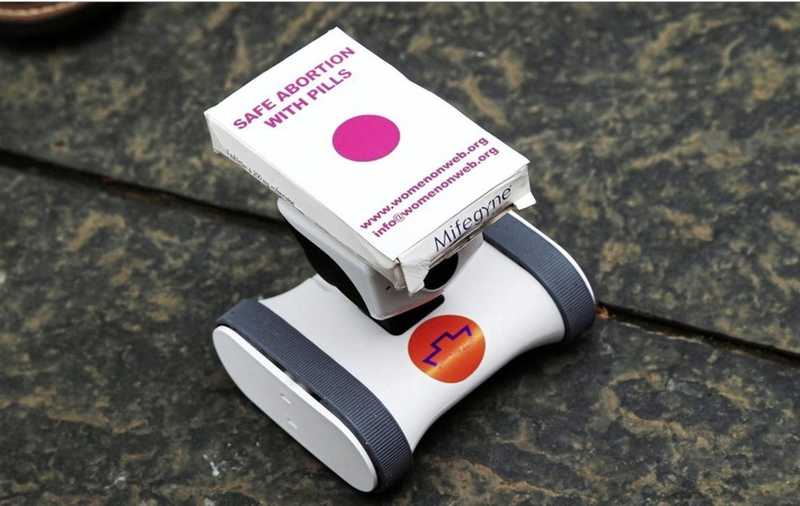 The location of the planned action was dominated by at least 20 heavily armed police men and 4 arrest-vans.
Rosa Northern Ireland activists dressed as handmaids and lined up in front of the court building.

The police Commander inquired about or intentions of the protest  and urged us not to use the robots and the abortion pills as he had received orders to confiscate everything.

So we decided to give the robot and pills to the police so that they could do their investigation. Of course they did not know there was another robot...........

The protest continued with chanting and speeches.

Meanwhile in Amsterdam the robot operators were ready to go.  Although the initial plan was that the doctor in Amsterdam would counsel the women through the robot, we realised that this would be impossible:

While the police were watching the speeches,  the other abortion pill robot silently made its way through the crowds.

Before the police noticed,  one of the women quickly took the package with abortion pills from the robot.

And three women swallowed the abortion pills in front of the camera's.

While the women were taking the pills, the other abortion robot was confiscated by the police. The robot filmed its own arrest.

The right to freedom of expression includes the choice of the form in which ideas were conveyed, without unreasonable interference by the authorities, particularly in the case of symbolic protest activities, as it is currently the case.

Everybody was listening to the statements of the ROSA activists when a police man isolated one of the women who took the abortion pills and requested her to follow him for questioning.

When the activists saw this happening, they surrounded them and started chanting. The police backed off.

All activists and some press gathered at the Bus4Chooce for its tour through Northern Ireland, with final destination Derry.

In Derry the bus was greeted by other feminist groups

A video report from Channel 4