About 85% of sexually active women who do not use contraceptives become pregnant within a year. A woman can also become pregnant while breastfeeding and from about 10 days after childbirth and even during her menstruation. Withdrawal of the penis prior to ejaculation during intercourse (coitus interruptus) and periodic abstinence do not effectively prevent pregnancy nor provide protection against STDs. Here you can read more about several forms of contraceptives. 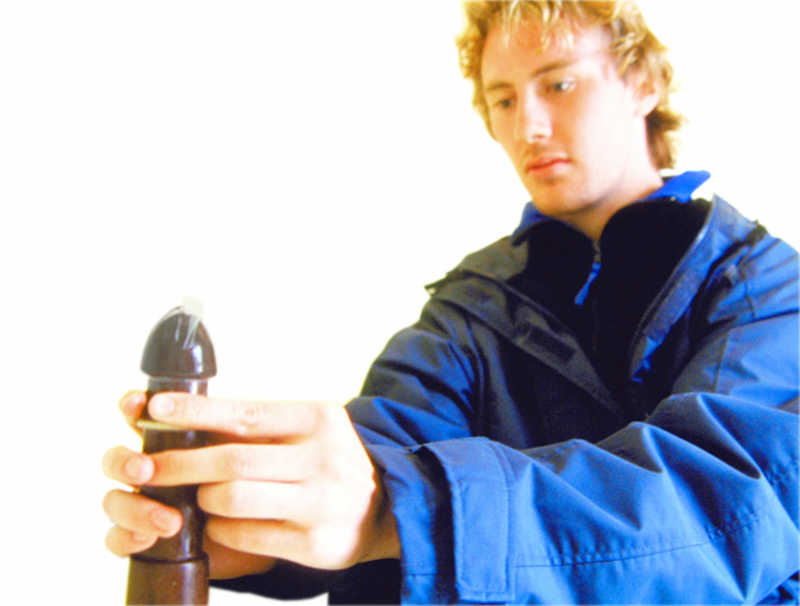 Boy learning to use condoms in a sexual education workshop in Poland, July 2003. Image copyright Women on Waves 2004.

You can prevent an unwanted pregnancy with:
1- Total Abstinence
2- Use of contraceptives

To prevent unwanted pregnancy always use a form of contraception when you are sexually active.

Contraception methods
No method of contraception gives a 100% protection.
The male latex condom is the only contraceptive method considered highly effective in reducing the risk of STDs. Birth control pills, Implant and IUDs do not protect against STD infection.

DIAPHRAGM is a rubber disk with a flexible rim that covers the cervix and must be used together with spermicide. It is available by prescription only and must be sized by a health professional. The diaphragm protects for six hours and should be left in place for at least six hours after the last intercourse but not for longer than a total of 24 hours.

ORAL CONTRACEPTIVES protect against pregnancy by the combined actions of the hormones estrogens and progestin. The hormones prevent ovulation. The pills have to be taken every day as directed and do not work after vomiting or diarrhoea. Side effects of the pill can be nausea, headache, breast tenderness, weight gain, irregular bleeding, and depression.

DEPO-PROVERA is a hormonal contraceptive injected into a muscle on the arm or buttock every three months. The injection must be repeated every 3 months. The menstruation can become irregular and sometimes even absent.

IMPLANTS (such as Norplant or implanon) are made up of small rubber rods, which are surgically implanted under the skin of the upper arm, where they release the contraceptive steroid levonorgestrel. Their protection lasts from 3 to 5 years. Side effects include menstrual cycle changes, weight gain, breast tenderness and loss of bone mass.

IUD is a T-shaped device inserted into the uterus by a health-care professional. The IUD can remain in place for 5- 10 years. IUD’s have one of the lowest failure rates of contraceptive method. Sometimes the IUD can be expelled and a woman has to check each month after her period with her finger if she can still feel the threads of the IUD. Other side effects can include abnormal bleeding, and cramps but this occurs mostly only during and immediately after insertion.

Hormonal-IUD is an IUD with a small hormonal (progestogen) sleeve. It is one of the most effective forms of birth control. Next, to the above-mentioned characteristics of an IUD, it can remain in place for 5 years but has no heavy bleeding side effects. As most women experience only lighter periods and less bleeding (some stop completely having periods), it’s supposed to be a perfect therapy as well for women with heavy cycle bleedings.

FEMALE STERILIZATION is done surgically. The tubes are ligated as a result of which the egg-cells can not encounter the sperm cells anymore and thus the woman can not get pregnant. It is a permanent form of contraception.

FEMALE CONDOM is made of soft rubber and can be used only once. As a mechanical barrier method of contraception worn by women it’s inserted easily into the vagina before sex and prevents direct vaginal contact with semen, infectious genital discharges, and genital lesions It is shaped like a long tube or sheath, with one closed end and one open end, and at each end, there's a flexible ring, helping to keep the female condom in place once it's inserted. Condoms are the most effective method for reducing the risk of infection from the viruses that cause AIDS and other sexually transmitted diseases (STD’s).

EMERGENCY CONTRACEPTION must be taken within 3 days of unprotected sex, depending on the type used, however, the sooner used, the more effective. It prevents an unplanned pregnancy by delaying the ovulation. Most combination birth control pills (estrogens and progesterone) can also be used. Take within 72 hours of unprotected sex one dose 100 µg ethinylestradiol  (=2 to 4 birth control pills depending on the ethinylestradiol amount in each pill), and 12 hours later a second dose. For information on pill brands and number of pills per dose see http://ec.princeton.edu/questions/dose.html#dose

More information can be found at the Emergency Contraception website http://ec.princeton.edu/ This website will also inform on the what type of EC and birth control pills are available in your country and how to use them as emergency contraceptives.

MORNING-AFTER IUD must be inserted within 5 days of unprotected intercourse. The IUD can stay for 5 to 10 years.

CONDOMS are mostly made from latex rubber and can be used only once. Some have spermicide added to kill sperm. They act as a mechanical barrier, preventing direct vaginal contact with semen, infectious genital discharges, and genital lesions. Condoms are the most effective method for reducing the risk of infection from the viruses that cause AIDS and other sexually transmitted diseases (STD’s). It is important to use it well and put the condom on before intercourse

MALE STERILIZATION also known as vasectomy, is a quick operation performed under local anaesthesia with possible minor post-surgical complications, such as bleeding or infection. The ability to get an erection and an ejaculation does not disappear. The sperm cells are just a very small part (1%) of the fluid and a man will not notice any difference in ejaculation. The body will absorb the sperm cells.