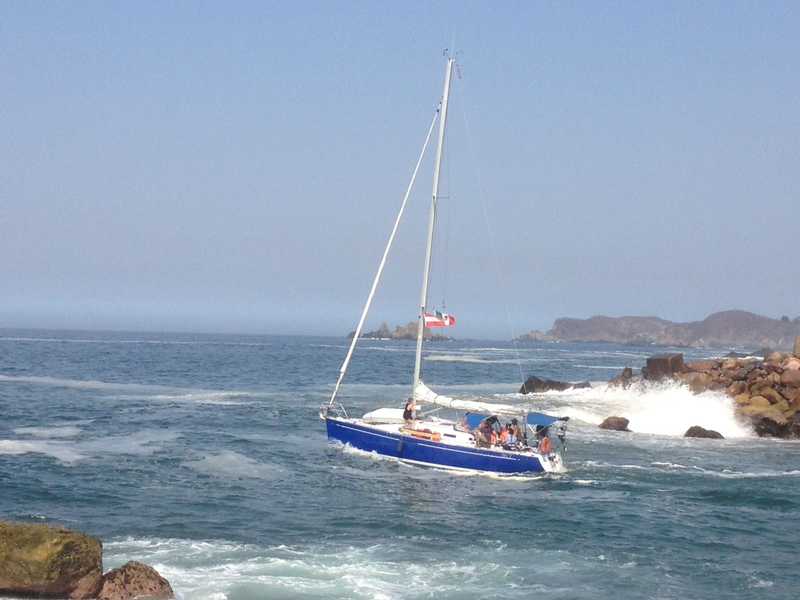 More than one-third of all women having a clandestine abortion (36%) are expected to have complications that require medical treatment across Mexico. However, an estimated 25% of these women do not receive the hospital care they need. Poor rural women are the least likely to receive needed treatment for postabortion complications. Among poor rural women with complications, almost half (45%) do not receive needed hospital care, compared with just 10% of nonpoor urban women.

The number of complication drops significantly to 0.68% in Mexico City, where abortion is legal and where from 2007 to 2016, 164 954 legal abortions have been performed. This shows the complications of abortion are completely preventable with access to safe, legal and effective abortions.

The activities of Women on Waves are based on the principle of double criminality in international law, which means that an act can only be punished if it was an offence in the country in which the activity took place.

The abortions are provided in international waters, where the law if the the ship’s flag state applies. This means there is no violation of the Mexican abortion law and thus none of the articles under criminal code will apply to anybody involved with Women on Waves. Women have a constitutional right to travel to other countries (article 13 of Universal declaration of human rights).

In 1974, Mexico’s Constitution was amended to recognize the right of all citizens to “decide in a free, responsible and informed manner on the number and spacing of their children.”

A decade ago, in April 2007, the Federal District decriminalized abortion, allowing termination of pregnancies without restriction during the first 12 weeks of gestation.

In all States, abortion is legal if is the result of rape or sexual violence. However, access to it is still highly restricted.

In 25 States, abortion is also legal to save the life of a pregnant woman; in 12, if the pregnancy poses a severe risk to a woman’s health; and in 13, in cases of severe fetal impairment. However, women meeting any of these criteria often have difficulty obtaining, or are unable to obtain, a legal procedure because of stigma and the lack of effective administrative processes that enable access to abortion services. (Source: Guttmacher Institute).

Abortion as a human right

The World Health Organisation’s definition of health is: “Health is a state of complete physical, mental and social well-being, and not merely the absence of disease or infirmity”.[1]

The authoritative General Comment 14 (2000) further applies the principles of accessibility, availability, appropriateness and assured quality to goods and services, which include essential medicines "as defined by the WHO Action Programme on Essential Drugs".[3]

In October 2011, Anand Grover, the UN Special Rapporteur on the Right to Health, submitted a report to the UN General Assembly which stated, “Criminal laws penalising and restricting induced abortion are the paradigmatic examples of impermissible barriers to the realisation of women's right to health and must be eliminated. These laws infringe women's dignity and autonomy by severely restricting decision-making by women in respect of their sexual and reproductive health” [4].

General comment No. 22 (2016) on the right to sexual and reproductive health (article 12 of the International Covenant on Economic, Social and Cultural Rights) states that, “Essential medicines should also be available, including a wide range of contraceptive methods, such as condoms and emergency contraception, medicines for abortion and for post-abortion care, and medicines, including generic medicines, for the prevention and treatment of sexually transmitted infections and HIV.”[5]

Responsibility of states to refrain from limiting access to health

States are under the positive obligation to respect the right to health by refraining from limiting access to contraceptives and other means of maintaining sexual and reproductive health such as medical abortions.

The General Comment of the Committee on Economic Social and Cultural Rights on the right to the highest attainable standard of health in the International Covenant on Economic, Social and Cultural Rights paragraph 42 states: “While only States are parties to the Covenant and thus ultimately accountable for compliance with it, all members of society - individuals, including health professionals, families, local communities, intergovernmental and non-governmental organizations, civil society organizations, as well as the private business sector - have responsibilities regarding the realization of the right to health. State parties should therefore provide an environment which facilitates the discharge of these responsibilities. [6]

General comment No. 22 (2016) on the right to sexual and reproductive health (article 12 of the International Covenant on Economic, Social and Cultural Rights) states that:

UNCLOS (United Nations Conventions on the laws of the Sea)

Women on Waves and Theory of Change

Women on Waves envisions a world where all women can decide about their bodies and lives and can access sexual health services/information including safe abortion services no matter where they live or what is their social economic status. The impact of an unwanted pregnancy on the lives of women and girls is profound. Worldwide 43 million women have an abortion every year. In countries where abortion is illegal 21 million women resort to illegal abortions as a result of which 47.000 women die every year. Abortion is fundamentally about social and gender justice. Women and girls with money and access to information will always be able to pay for a safe illegal abortion with a doctor or travel to another country, only those without financial resources an access to information are effected by restrictive abortion laws. Therefore we have to continue working on trying to break the taboo around abortions and legalize abortions and at in the mean time make sure women have access to contraceptives and safe medical abortions.

The road to changing the law is a long one, but the most important element is a supportive public opinion. In order to change public opinion on abortion, the consequences of illegal abortion have to be made visible.