Beginning of February 2018, in south Kivu DRC, in a region with a high number of STI and HIV infections, Women on Waves gave a five-day training in cooperation with GFV-VIH, a local organization. The training included all kinds of SRHR topics such as: medical abortion, post-abortion care, contraceptives, legal aspects of safe abortion, and how to communicate and create a safe abortion project. The training was a part of a broader three-year project funded by SAAF and was the initial launching of the program. 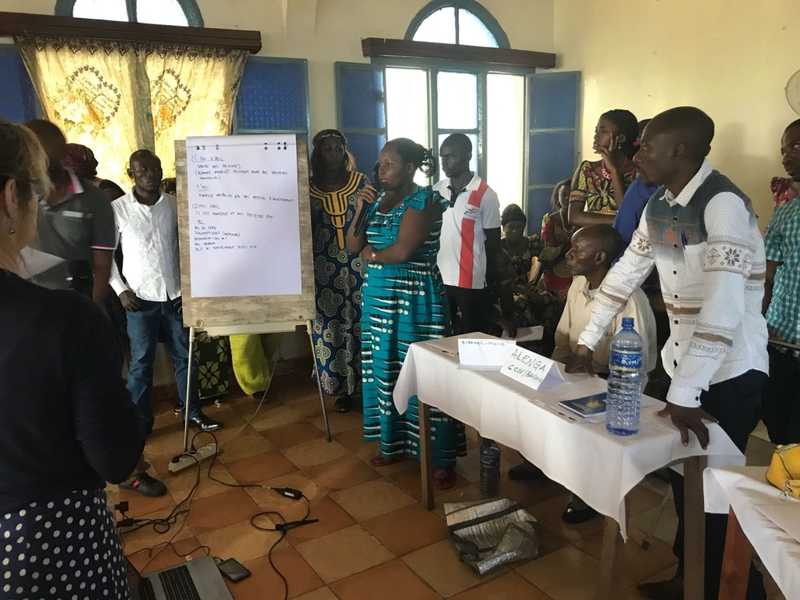 Although, due to the security concerns, the location was changed last minute to another city Uvira, about 40 persons attended the training. It was a very motivated mixed group with a different background, varying from a local women group, community workers and a medical group (about 15), being nurses, midwives, pharmacist and doctors. Because of this there were mixed needs and expectations, so partly (2 days) the activities were divided accordingly in medical and non medical related sessions. The separate training of the medical group was more focussed on PAC and IUD training with a short practical part, training on a model and by using papayas (for the PAC training with MVA). At the same time, the non medical group focussed on value clarification, setting up a hotline project, and dissemination of this specific information; how, to whom and what network will be needed. A special focus has been put on International human right laws and clarifications, like the "Maputo Protocol" which has been signed by DRC.

We have experienced it as very valuable to give a training in this combination, being a human rights advocate and a medical doctor as this expertise made the training very practical and reliable. The the support and assistance of a local obstetrician was more than welcome and made the training convincing on how to move on in this region. This was a big advantage for training in a country with very restrictive laws, as practical steps were made straight away after the training. Even during the training days 8 women (trainees), started using effective long acting family planning, like oral contraceptive pill (3), implant (3) and IUD (2) and 1 woman was counseled for medical abortion. This was the first step forwards as many myths were noticed about the use of, especially long acting, contraceptives.

The training of such a big and mixed group was very challenging. This project will become sustainable, as local doctors and midwives are involved as well.

During our visit in Uvira we had the opportunity to visit 2 SRHR clinics; SOS-FEC and GVP-MASAR, for which we are very grateful as it provided more insight information.  As the last clinic offered more extended medical service on mother- and childcare as well, they noticed less stigma for clients visiting the clinic for contraception and related problems, so this seems an important issue.

The need for trainings like this was underlined by the fact that during our introduction session the first day was declared that every trainee knew a woman or girl who had died due to unsafe abortion! Because of this the following story is added:

A VICTIM TOO MUCH IN UVIRA: A WOMAN DYING FROM COMPLICATIONS OF CLANDESTINAL ABORTION

Her name is J, single, mother of two children, single mother and lived with her older sister. She found herself pregnant with her brother-in-law and wanted to terminate the pregnancy clandestinely because the same brother-in-law was already living with her sister whom he also made pregnant. After arrival in the center in Uvira "Mother-Child Center" in a very bad medical condition with peritonitis and sepsis, the poor woman could not be saved. How many deaths must we still register so that the law on abortions can be reviewed? Many similar cases are recorded in the remote environment, landlocked and inaccessible without being reported. Letting thousands of women and girls continue to die with such complications is a social injustice. Let us unite to change this binding law on abortion.