For immediate release:
26-8-2018: Today 125 women swallowed the abortion pill in defiance of the restrictive abortion laws in South Korea. Even though abortion is illegal, every hour 125 women have an abortion in South Korea. The protest took place in front of Boshingak in the center of Seoul. It was organised by the Korean feminist organisations Femidangdang and Baumealame, in collaboration with Women on Waves and Women on Web. The facebook post announcing the action and calling for mobilisation was censored by Facebook and removed. 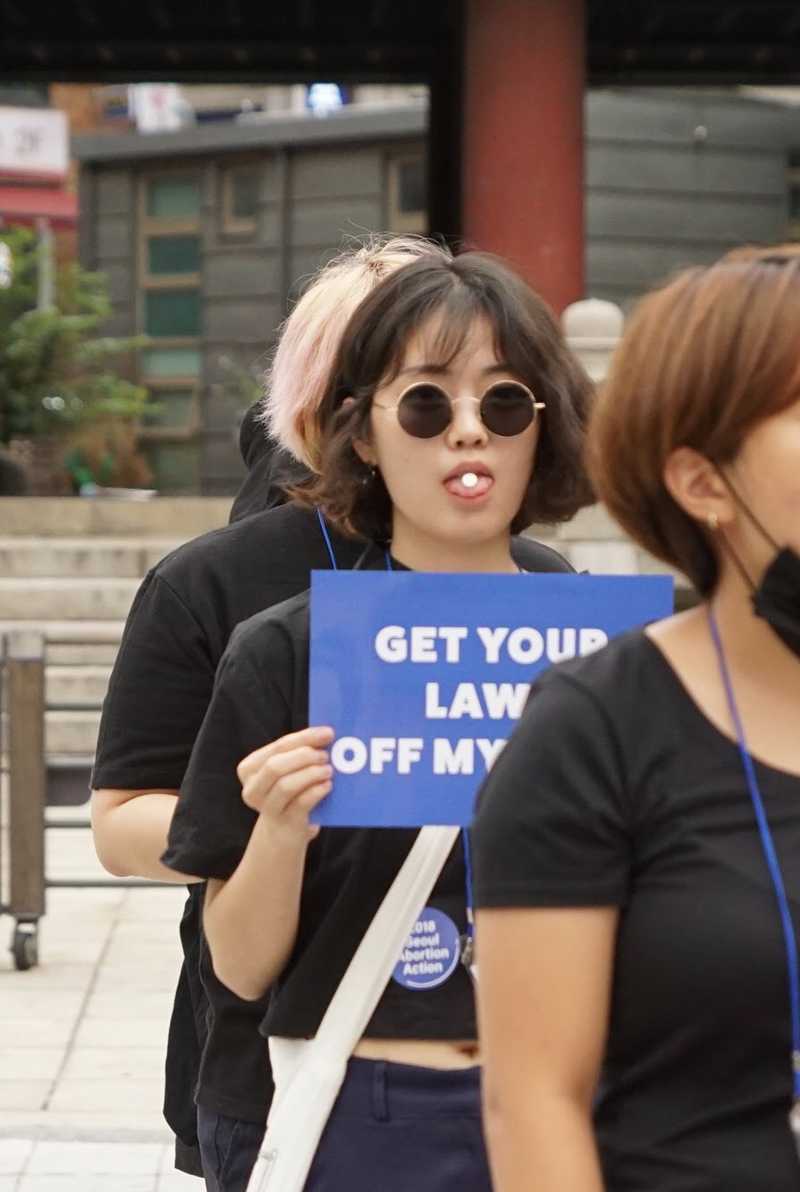 My Body Is Not Illegal

Terminating a pregnancy is not a sin. It is not taboo. Right here in South Korea, where abortion is prohibited by law, we speak for women choosing to terminate pregnancies. Abortion is a right that must be secured no matter the social status of the woman. Society speaks of abortion as a decision that only promiscuous or unmarried women choose. Pregnancy is considered a just punishment that such women must bear. However, abortion is an operation that is most frequently enacted worldwide, and many women choose abortion for various reasons. According to the Korean Association of Obstetricians & Gynecologists, it is estimated that around 3000 surgical abortions are conducted within our country every day. This is three times the amount our government estimates. During the single hour that our performance is taking place, 125 South Korean women decide to terminate their pregnancy. Right at this moment, we speak of the women that choose abortion. 125 of us have come together to make the following demands to a country that imposes the responsibility of unwanted pregnancies upon women, and women only.

We demand for the abolition of Clause 269 of Criminal Law.

Clause 269 is the result of an outdated effort for control over women’s bodies for population control. Our bodies have been considered a means for the realization of population policies. Until the 70s abortion was actively encouraged and promoted by a government that wanted to enforce birth control. As the lowered birthrate became problematic the government decided to legislate against abortion. Any surgical abortion practices other than the few instances allowed by the Mother and Child Health Law were ruled “immoral medical practice”, and penalties were strengthened. As such recent history shows, the voices of women have been sidelined in the decision-making process of pregnancy and childbirth. Regarded as instruments of government policies, women have been alienated from the conversation entirely, stripped of all autonomy. We reject the binary opposition of ‘life’ and ‘choice’. Our reproductive and health rights must be secured. Consider the movements across countries such as Poland, Ireland and Argentina. The abolition of anti-abortion legislation is a demand shared worldwide and cannot be silenced. We denounce the Constitutional Court that decided to postpone judgment of the unconstitutional criminalization of abortion. Abortion rights are basic human rights. All legislation that criminalizes abortion must be abolished.

We demand the right to safe abortion procedures for all

We demand the introduction of mifepristone, for the medical termination of pregnancy.

Today we take a single mifepristone pill together for all the women in countries that prohibit abortion like ours. We have been sent the medication by ‘Women on Web’, an organization that works to provide all women with abortion medication. Abortion can be surgical or medical, but in South Korea the latter is not an alternative. Medical termination of pregnancy through mifepristone has a success rate of 90 to 98%.  Mifepristone is not available in South Korea. Many do not even know that such medication exists. We denounce this reality where the reproductive health rights of women are not under consideration and demand the proper introduction of mifepristone to guarantee an option that is safe and accessible to all.

According to the Korean Association of Obstetricians & Gynecologists, it is estimated that around 3000 surgical abortions are conducted within our country every day. This is three times the amount our government estimates.

The Supreme court is expected to decide about the legalisation of abortion later this year.

Abortion is one of the most performed medical interventions in the world. An estimated 56 million induced abortions occurred each year worldwide. Globally, 25% of all pregnancies end in abortion.

Abortion is legal in most countries of the world such as the United States, Canada, India, Russia, China and almost all European countries.

The restriction of abortion services creates social inequality as traveling to another country where abortion is allowed or getting a safe underground abortion provided by a doctor are very expensive.  This means that women with access to financial means and information will always be able to access safe abortion services and women without the financial resources are most affected by restrictive abortion laws.  By restricting access to safe abortion, countries violate women’s rights especially Article 25 of the United Nations' Universal Declaration of Human Rights states that "Everyone has the right to a standard of living adequate for the health and well-being of himself and of his family, including food, clothing, housing and medical care and necessary social services."

The medicines used for a medical abortion, mifepristone and misoprostol, have been on the list of essential medicines of the WHO since 2005 and are available in almost all European countries, USA, Russia, China, Australia and Canada.

Scientific research by the World Health Organisation has shown that medical abortion can easily be done by women themselves at home. A medical abortion has the same health impact as a spontaneous miscarriage.  The risk of an abortion with medicines are similar to the risks of commonly prescribed medicines and over the counter medication such as antibiotics and some painkillers.  An abortion with pills is much safer than childbirth and safer than plastic surgery.

Through the website women can do an online consultation, which is reviewed by a doctor. If there are no contraindications, women can receive the abortion pills at their home address through mail.

Several scientific studies in the outcome of the abortions and the experiences of women using the Women on Web service have proven the telemedical service is very safe, very effective and highly acceptable for women.

The WHO also confirmed that abortions done with the help of Women on Web are considered safe abortions.