In October 2007, Rebecca Gomperts was invited by Emmy Bezzina of the Alpha Liberal Democratic Party to come to Malta to give a lecture. 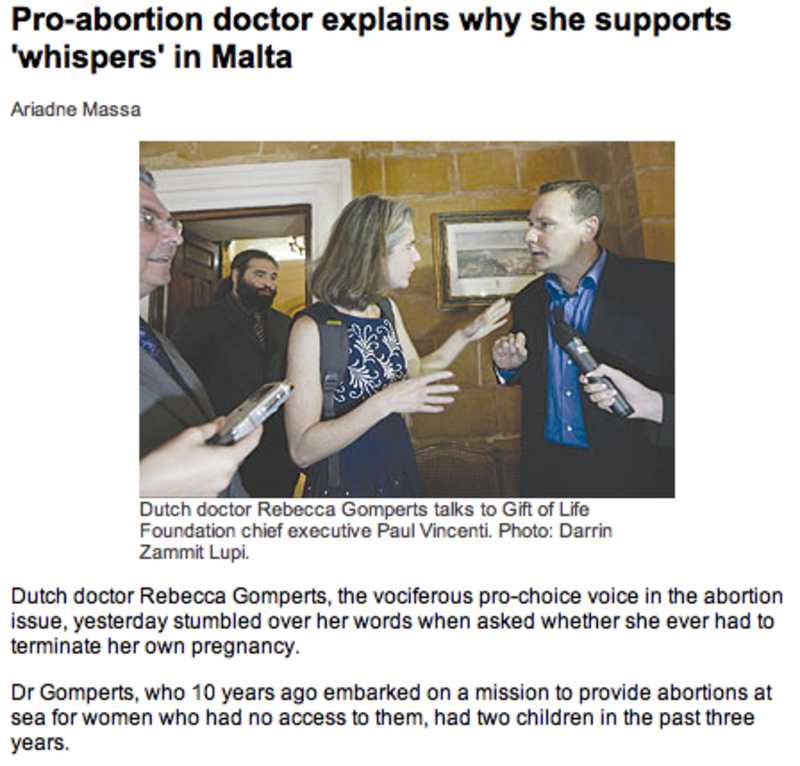 The lecture in Malta resulted in frontpage news and more than 25 newspaper articles and editorials for a month and days of television coverage. Anti abortion groups prayed in front of the Hotel where Rebecca Gomperts was staying.

However for the first time also some serious voices supporting abortion rights could be heard:

Raphael Vassallo wrote in Malta Today on October 14, 2007: All things told, Rebecca Gomperts might not have won over many hearts and minds in this country. But her visit has nonetheless served a very useful purpose……It has thrown into sharp focus our intense unfamiliarity with the European Union, which we evidently thought was just about roads and structural funds….. And it has once again established that at the end of the day, “democracy” is nothing but a nine-letter word beginning with a “D”.

Daphne Caruana Galizia wrote in the Malta independent on Sunday, October 21, 2007 “In reality, thousands of Maltese women have had abortions over the years because they have superb access to abortion clinics, better access than women living in many other parts of Europe. The nearest clinics are a short, cheap flight or catamaran ride away, precisely the sort of distance that women living in large countries must travel to the nearest city if they live in rural areas. Rebecca Gomperts wondered aloud at her public meeting why Maltese women are not campaigning for abortion. …..The truth is that Maltese women have things sorted smoothly, as Maltese women tend to do: if they want an abortion they can easily have one up the road in Catania, but at the same time they are able to salve their consciences by fighting against abortion in Malta. This is an extremely convenient situation: a ban on abortion within our borders, giving us brownie points with God, but none of the problems associated with a ban on abortion, as women can still have all the abortions they want to. If the nearest abortion clinic were a Lm700 flight away from Malta, or a thousand-mile hike across a desert, you can rest assured that the story would be very different. There wouldn’t be quite as much moralising then.”