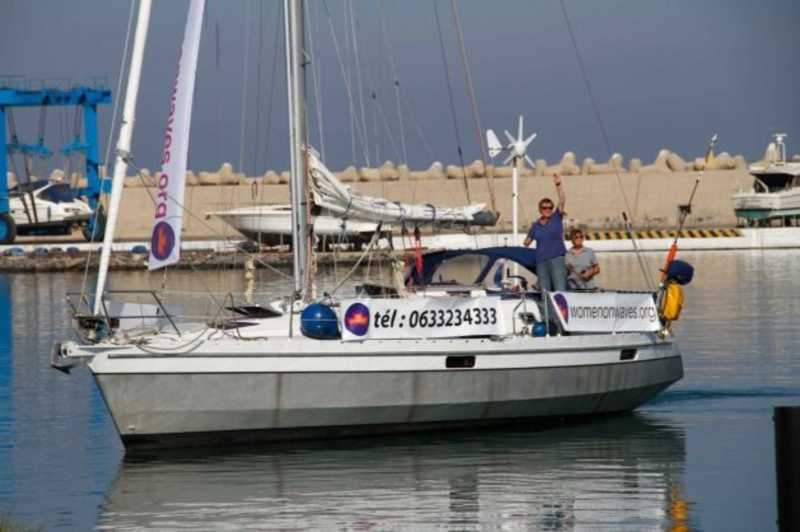 One of the goals of the campaign, to support the movement MALI to break the taboo and to start a discussions within the country about the need to legalize abortion, was achieved by the enormous media attention.

While the ship intended to sail out to international waters outside Moroccan territory, to provide safe medical abortions, we know that this would not solve the problem for the 600 to 800 women per day in Morocco who are in need of an abortion. To leave a sustainable solution behind,  Women on waves launched a safe abortion hotline to provide information to Moroccan women on how to use the medicine Artotec that is available in the pharmacy of Morocco without doctors prescription to induce a safe abortion.

Why the Trojan Horse?

As Women on Waves had been blocked by warships during the campaign in Portual in 2004, we developed this strategy to anticipate this possible reaction from the government. The day of the expected arrival of the ship, the Moroccan authorities blocked the entrance of the harbor. Neither the crew of Women on Waves, nor journalists or the public were able to enter and visit the ship. Moreover, a big marine ship was noticed sailing in front of the harbor. At the entrance of the harbor the police and local authorities protected aggressive anti-abortion protesters who were planted there by the government, according to local resources.

Through the back exit from a hotel the Women on Waves and MALI activists, some journalists, and the Dutch parliamentarian Liesbeth van Tongeren were able to enter the harbor. At that moment the ship raised flags and banners and  sailing through the harbor. The banners displayed the telephone number of the hotline (0633234333). The police guard stopped the group before they reached the ship.

After the yacht exposed its identity as the Women on Waves abortion ship, the Moroccan authorities  searched the ship, confiscated the banners, and the captains were informed that they had to leave the harbor. When the captains asked for the lawyer, this was refused and they were instructed to leave even though nothing incriminating was found and no laws were broken. There was an overwhelming amount of police and secret service. The ship was escorted out from the harbor by the navy.

The images of the ship with the hotline number were widely distributed in the national media. Women on Waves and MALI mentioned the hotline number in every interview. So far hundreds of women have already called the hotline, on which a pre-recorded message provides all the information on how to do a safe abortion in Arabic. In this way, many more women with unwanted pregnancies are helped then by sailing into international waters. Every day 600-800 women have an illegal abortion in Morocco; every year 90 women are dying due to the lack of save abortion services. With the medicine Misoprostol, in Morocco sold as Artotec, they can have a save abortion as long as abortion is not legalized.