European Court rules that Portugal violated Freedom of Expression of Women on Waves. 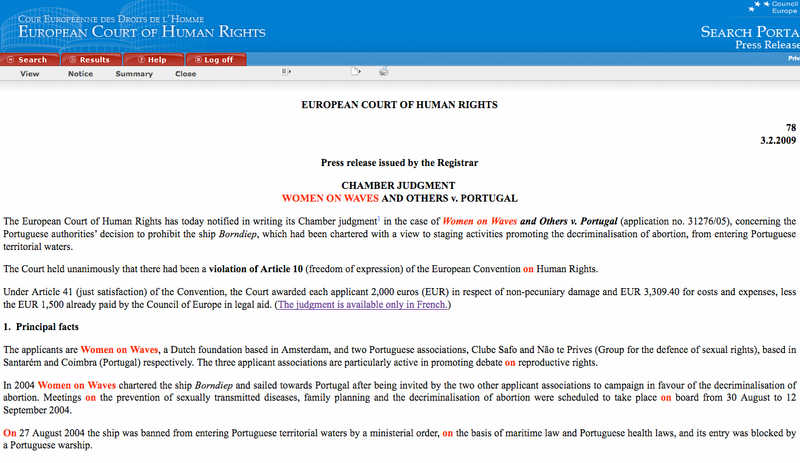 The European Court of Human Rights ruled today that article 10, that guarantees the freedom of expression, was violated when the Portuguese government send warships to prevent the Women on Waves ship from entering Portugal in 2004. With a ship, Women on Waves sails to countries where abortion is illegal. After sailing to international waters, early medical abortions can be provided safely and legally. National penal legislation, and thus also abortion laws, extends only to territorial waters; outside that 12-miles radius the law of the country where the ship is registered applies. Women on Waves’ mission is to prevent unsafe abortions and empower women to exercise their human right to physical and mental autonomy. Every year 20 million women resort to unsafe abortion services as a result of which 70.000 women die unnecessary.
The case was filed by Women on Waves and two Portuguese associations, Clube Safo and Não te Prives (for the press release and the ruling of the ECHR please visit echrblog.blogspot.com/2009/02/women-on-waves.html

The purpose of the ships visit to Portugal was to call attention to the consequences of illegal abortion, to give information and sexual health education and to catalyze change of the restrictive abortion law. Until 2007, when abortion was legalized Portugal was the only country within the EU that actively prosecuted women and doctors for illegal abortion.
When the ship arrived at Portuguese national waters, the Portuguese minister of Defense forbade the ship to enter national waters. Even though the ship did not violate any Portuguese, Dutch or international laws with the activities on board.
The minister of Defense even send two war ships to monitor the ship Borndiep during 24 hours a day while it was drifting in international waters. The majority of Portuguese population supported the campaign.
Early December 2004, only two months after the ships visit to Portugal, the Portuguese president decided to dissolve the Portuguese government. The Socialist Party won the new elections in February 2005 with an overwhelming majority and promised to hold a new referendum on easing the country's strict laws against abortion as soon as possible.
The national referendum on abortion took place in February 2007, two and half year after the Women on Waves ship visited Portugal, Abortion is now legalized in Portugal.

For more information please send an email to :press@womenonwaves.org