Diary of a t-shirt

Here you can read the story of a woman in Brazil who made an "I had an abortion" t-shirt. Her intention was to start a debate about decriminalizing abortion and she wrote us the reactions she got after wearing it for a day. 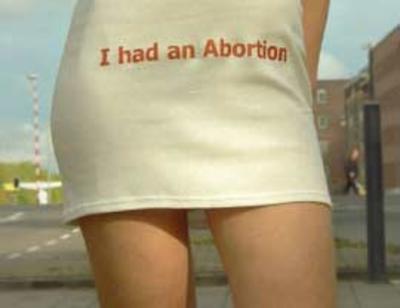 I saw on the Women on Waves site that they have a campaign with a shirt saying, â€œI had an abortionâ€?. I thought it was a wonderful way to break the taboo and bring the discussion to the table. That inspired me and I did a t-shirt saying, â€œEu fiz um aborto. Eu fiz um abortoâ€? (I had an abortion. I had an abortion). I repeated the sentence because it was difficult to read, right on the curve bellow the breasts. It's a sleeveless girly t-shirt, in low cream color. The writing is in black and it covers all of the t-shirt. It's quite big and gets a lot of attention.

The only person who knew about it was and old friend of mine, who loved the idea and who was the one to say to me to keep a journal about it, to write down peopleâ€™s reaction over it. So, thank you.

When I told my father about it, my idea of wearing it and why, he went silent and said in the most quiet voice: â€œBut you didnâ€™t have an abortionâ€? and I said â€œSo? I didnâ€™t write the Bible either, and I have a t-shirt that says itâ€?. â€œYeah, but writing the Bible is impossible. It's very possible to have an abortionâ€?.

I think he was trying to alert me about the hate response I could get. And I had thought about it. I got to confess I was a little frightened about it. To get eggs throw at me or to be slapped or something. In Brazil, abortion is illegal. And the subject gets a very passionate, furious and ignorant response from the debaters from both sides. But then I thought of all the women I was standing up for and that gave me some courage. I know I could avoid this by doing a t-shirt that said â€œDecriminalize abortionâ€? or â€œLegalize abortionâ€? or something, and not make myself a target. But that was not the point; it was to give all those women without a face a support. As to say, don't worry, it's all right, youâ€™re all right.

So today was my first day wearing the t-shirt. My idea is not to engage into conversations or debates; I believe this will go on without saying. Either talking to friends about this crazy bitch that was wearing this t-shirt in the street today, or whatever they think. I simply want to see peopleâ€™s reactions and if they inquire me about it, then I have free pass to discuss.

Asking to the doorman in a building for directions, heâ€™s a black man in his mid-forties. He was nice but the minute he read the t-shirt (which I can tell he did, it's quite big, you don't even have to focus that much to read it) he was so much nicer and with a wilder smile. It looked quite genuine, not like a nervous laugh. Don't know what he thought about it. Maybe admired my courage or maybe knew someone who did one.

I was walking down the street going to a restaurant when I encounter an old friend of my father who point blank comes out to me and says: â€œDoes your father know you had an abortion? I am going to tellâ€?. His tone was a little playful, and I think he was trying to joke.

Right after encountering this friend of my father, I keep walking down the street and a girl, mid-twenties, talking on the cell phone, is passing by me and I notice sheâ€™s reading the t-shirt. I look at her to see her reaction and she notices too and looks the other way, looking frightened. Don't know why. But I think she was afraid of me.

Paying the bill in the restaurant, the woman on the check in was all smiles. A minute later, when I was looking away to get the money, I look at her and she is no longer making an effort to be nice. I don't know if I was getting paranoid or if it was in fact a reaction to the t-shirt.

Getting out of the restaurant, an old man read the t-shirt and appeared either indifference or repulse. Couldn't quite tell.

Waiting to cross the street, the guy on the other side is reading it, mid-twenties. When we cross each other he looks at me in a nasty way that better resembles he was thinking â€œyou dirty hoâ€?, and also very disapproving.

In the doctorâ€™s office, on the waiting area, I see a boy, twenties, staring at me a lot. I know he read it and was intrigued by it. But thatâ€™s all he does, stare.

The woman sitting next to me on the waiting area is reading a magazine. A minute later sheâ€™s no longer reading it and I think she looks at the t-shirt. She starts to talk to me about how she thinks she got the flu from the boy (the one who was staring), cause he was sneezing. But either so she changes seats and goes back to the side where the boy is. I think she meant this conversation to be somehow of an excuse for her to change seats. An unsuccessful one, but one.

The doctor says my outfit is nice (red pant, black t-shirt and, over it, the abortion t-shirt). But I think he didnâ€™t read the t-shirt when he said it. I believe that he didnâ€™t show reaction because he is also in favor of legalizing it. Or because he was being professional. But knowing what I think I know about it, I would go with the first option.

Arriving at my parentâ€™s house, my sister asks me to straight up my shirt so she can read it. I wait for her to read and she looks at me and forces a smile and laughs. It's a nervous laughter from someone who is really stunned, canâ€™t formulate a response and just fakes one.

I go say hi to my aunt who is at the door. She is in her fifties. She reads the first sentence waiting for the second to be a follow up. I think she was expecting a funny line or something. So I explain to her, â€œI wrote twice because it was hard to readâ€?. And she looks a little caught off guard and says, â€œYou wrote this?â€?, I say yes and she looks at me as if asking, â€œwhy, dear God, why?â€?. But I just keep looking at her and she looks really stunned, as if I am going crazy. And quite uncomfortable. Thereâ€™s a lady in the back seat, mid-twenties. She also reads what the t-shirt says: â€œI had an abortion. Ohhh, thatÂ´s a pityâ€?, she says. I say nothing.

â€œI had an abortion, I had an abortionâ€?, I couldn't figure it out what he wanted me to say, so I said â€œYeah, thatâ€™s what it saysâ€?, â€œYou had an abortion?â€?, â€œThatâ€™s not the pointâ€?. Pause for him. â€œAre you in favor of abortion?â€?. Pause for me. â€œI am in favor of decriminalizing abortionâ€?, â€œWhat does that mean?â€?, â€œThat means take it out of the penal codeâ€?. â€œYou don't believe it's a crime?â€?, â€œNo, I donâ€™tâ€?. Pause for him. â€œWhy?â€?, â€œBecause I think woman have the right to decideâ€?. Dead serious look on his face, shaking his head. â€œNo, it is a crime, thereâ€™s a life in thereâ€?.
I was in the house of friends playing cards and the brother of the host saw my t-shirt, read it out loud and that was the exchange we had. I said no more cause those conversations always make my head hurt. Seriously. But he continued the debate with his brother, who is in favor. So I sat in silence, believing I had accomplished something, I had brought the discussion to the table.