On Tuesday 21 June, 2016 at 10.00 am the abortion drone will fly abortion pills from Ireland to Northern Ireland at Narrow Water Castle near Newry. Several women will be present at the both sides of the border to reflect on the constant traveling of women between countries to obtain sexual and reproductive health services. 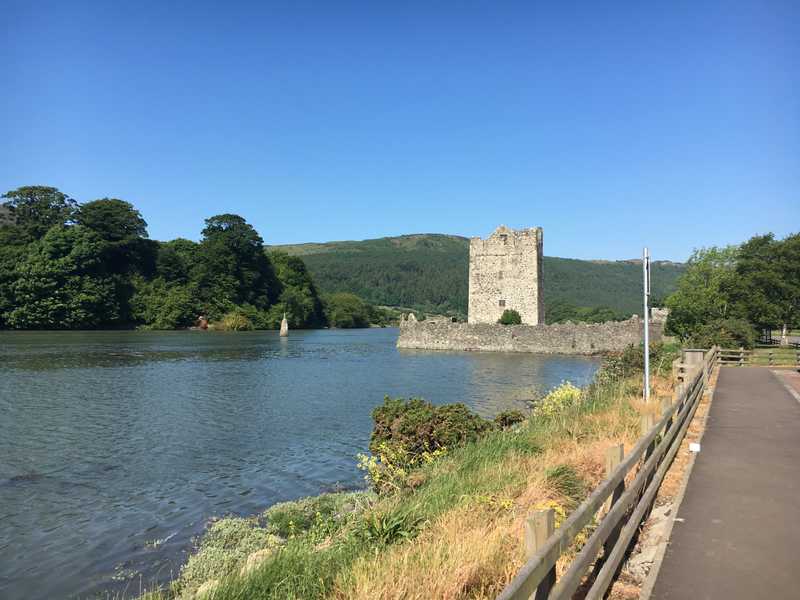 The Abortion Drone is a collaboration between Alliance for Choice; Rosa; Labour Alternative, the Abortion Rights Campaign; Youth Coalition for Sexual and Reproductive Rights and Women on Waves. It is an all-island act of solidarity between women in the north and the south to highlight the violation of human rights caused by the existing laws that criminalise abortion in both Northern Ireland and the Republic of Ireland except in very limited circumstances. ([1])

The Abortion drone will mark the different reality for Irish women to access safe abortion services compared to women in other European countries where abortion is legal. ([2], [3])

The different laws in both countries allow for a drone to fly abortion pills lawfully from the South to the North.

The drone will start its journey at 10.00 AM.  In Northern Ireland, women will take the abortion pills delivered by the drone.  Many asked whether or not the women taking the pills are pregnant, however this is a matter of medical confidentiality and the right to privacy.

The activities of the abortion drone campaign are protected by article 10 of the ECHR, the freedom of expression. The right to freedom of expression includes the choice of the form in which ideas were conveyed, without unreasonable interference by the authorities, particularly in the case of symbolic protest activities.

The medicines on the drone are mifepristone which is listed as an essential medicine by the World Health Organisation since 2005.

After the abortion drone flight, there will be a protest in front of the Court of Appeal in Belfast at 2.30 pm when the appeal regarding the decision by the High Court that Northern Ireland’s abortion law breaches the European Convention on Human Rights will be heard.

Thousands of women travel abroad to obtain an abortion. ([6],[7])

Given that Section 59 of the Offences against the Person Act 1861 was repealed as a result of the Protection of Life during Pregnancy Act 2013 and subsequently not replaced, it is not illegal to supply or procure authorised medication ([8])

On June 9 th, The UN Committee found Ireland’s abortion laws violates a woman’s basic human rights and called on Ireland to “amend its law on voluntary termination of pregnancy, including if necessary its Constitution, to ensure compliance with the Covenant, including effective, timely and accessible procedures for pregnancy termination in Ireland, and take measures to ensure that health-care providers are in a position to supply full information on safe abortion services without fearing being subjected to criminal sanctions.”

However the Irish government continues to refuses to take action.

The UK’s Abortion Act 1967 does not extend to Northern Ireland and the north’s abortion laws are still governed by sections 58 and 59 of the Offences Against the Person Act. ([9])  It is unlawful to perform an abortion in Northern Ireland except in very limited circumstances, namely: to preserve the life of the woman; or, a risk of real and serious adverse effect on the woman’s physical or mental health, which is either long term or permanent, as established by case law. ([10])

The Belfast High Court ruled that laws governing abortion in Northern Ireland are in breach of Article 8 of the European Convention on Human Rights. ([11])

Still, women face life imprisonment for a health service freely provided on the NHS elsewhere in the UK and recently a young women was given a three-month sentence suspended for two years for doing her own abortion with pills and another court case is pending. ([12])

However UK’s laws concerning e-health do apply in Northern Ireland. The drone will contain a legal electronic prescription from EU registered doctor with the medicines.([13])

The person receiving the drone is importing the medicines mifepristone and misoprostol for personal use as is allowed under UK legislation. ([14])

Both Misoprostol and Mifepristone are authorised medications in the UK.

The medicines used for a medical abortion, mifepristone and misoprostol, have been on the list of essential medicines of the WHO since 2005 and are available in almost all other European countries.

Scientific research by the World health Organisation has shown that medical abortion can easily be done by women themselves at home without supervision by health professionals. A medical abortion has the same health impact as a spontaneous miscarriage.  Usually women themselves handle a miscarriage without additional medical supervision. ([15],[16])

General comment No. 22 (2016) on the right to sexual and reproductive health (article 12 of the International Covenant on Economic, Social and Cultural Rights) states that, “Essential medicines should also be available, including a wide range of contraceptive methods, such as condoms and emergency contraception, medicines for abortion and for post-abortion care, and medicines, including generic medicines, for the prevention and treatment of sexually transmitted infections and HIV.” ([17])

"Drones are used to make areal shots and for military purposes. However they can also be used to deliver packages.  The abortion drone will fly abortion pills and this way appropriate the drone for women’s rights. Research has show that abortion pills are safe to use at home untill 10 weeks of pregnancy and even if countries restrict access to abortion, women will obtain abortion pills by  mail or by drone.” says dr Rebecca Gomperts from Women on Waves

[8] In the Republic of Ireland, Misoprostol is authorised by the Health Products Regulatory Authority (HPRA) and can therefore be obtained through prescription at a chemist or pharmacy.

Mifepristone has been granted market authorisation by the European Medical Agency (EMA). According to The Medicinal Products (Control of Placing on the Market) Regulations (2007), provided that a medication has product authorisation by either the HPRA or the EMA, it is not prohibited to import said medication into Ireland. (Source: http://www.ema.europa.eu/ema/index.jsp?curl=pages/medicines/pips/EMEA-000411-PIP01-08/pip_000068.jsp&mid=WC0b01ac058001d12

Therefore, mifepristone and misoprostol can be imported into the country via Irish customs for personal use. The medication should be in its original packaging, labelled correctly, no more than 3 months of supply and a note/prescription letter from the prescribing doctor is advised.  (Source: https://ireland.visahq.com/customs/)

59. Whosoever shall unlawfully supply or procure any poison or other noxious thing, or any instrument or thing whatsoever, knowing that the same is intended to be unlawfully used or employed with intent to procure the miscarriage of any woman, whether she be or be not with child, shall be guilty of a misdemeanor, and being convicted thereof shall be liable . . . to be kept in penal servitude. (Source: http://www.legislation.gov.uk/apni/1945/15/section/25)

[13] According to The National Health Service (Pharmaceutical and Local Pharmaceutical Services) Regulations Act (2013), electronic prescription form is defined as ‘data created in an electronic form for the purpose of ordering a drug or appliance…’ (Source: http://www.legislation.gov.uk/uksi/2013/349/pdfs/uksi_20130349_en.pdf)