27-6-2015: The Abortion Drone left at 11.00 in front of the Konzerthalle Carl Phillip Emanuel Bach in Frankfurt an der Oder and landed at the opposite side of the river in Slubice, Poland. There were no anti-abortion protesters. After the drones left, the German Police tried to intervene but the drone pilots were able to safely land the drones at the Polish side. Two Polish women swallowed the abortion pills that were delivered to them by the drones. The German police confiscated the drone controllers and personal iPads. They pressed criminal charges but it is totally unclear on what grounds. The medicines were provided on prescription by a doctor and both Poland and Germany are part of Schengen.
At 13.00 took place a meeting with presentations of the different organisations and about all aspects of medical abortion in the Hotel Kalinski, Jedności Robotniczej 13, Słubice
The Abortion Drone flight -live streamed live at
https://www.youtube.com/embed/nuA7fkYQy3E 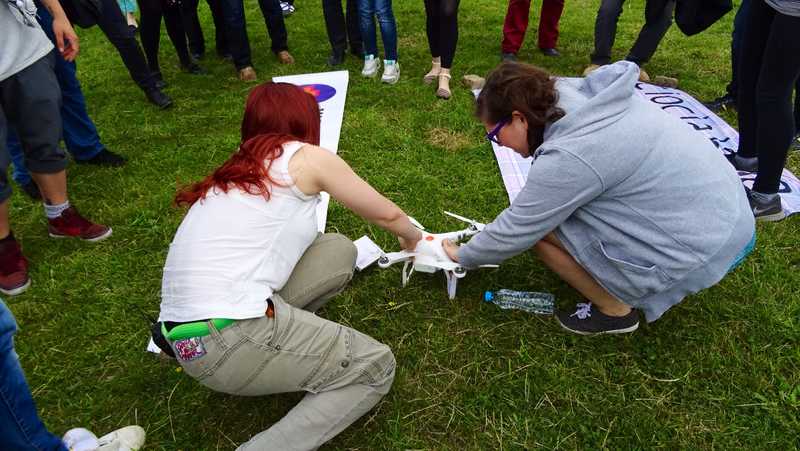 Even women who would be allowed to have an abortion under the restrictive law, are refused treatment by doctors and hospitals such as the case of the 14 years old raped girl P,  who was denied access to safe and legal abortion services due to harassment and intimidation by hospital workers, the police and others.  Alicja Tysiac suffered severe health consequences and won the case against the Polish  Government  In European Court of Human rights for denying a her  a access to a lawful abortion, but she is still affected by this.(4, 5)

At least 48.000 Polish women per year do not have access to safe legal abortion services.  However the estimates of the WHO are even much higher: approximately 240.000 abortions every year. (1)

The World Health Organisation’s definition of health is: “Health is a state of complete physical, mental and social well-being, and not merely the absence of disease or infirmity”.(2)

In October 2011, Anand Grover, the UN Special Rapporteur on the Right to Health, submitted a report to the UN General Assembly which stated: “Criminal laws penalising and restricting induced abortion are the paradigmatic examples of impermissible barriers to the realization of women's right to health and must be eliminated. These laws infringe women's dignity and autonomy by severely restricting decision-making by women in respect of their sexual and reproductive health”  (6)