More than 130 people participate in flashmob in Jogjakarta to launch safe abortion hotline. 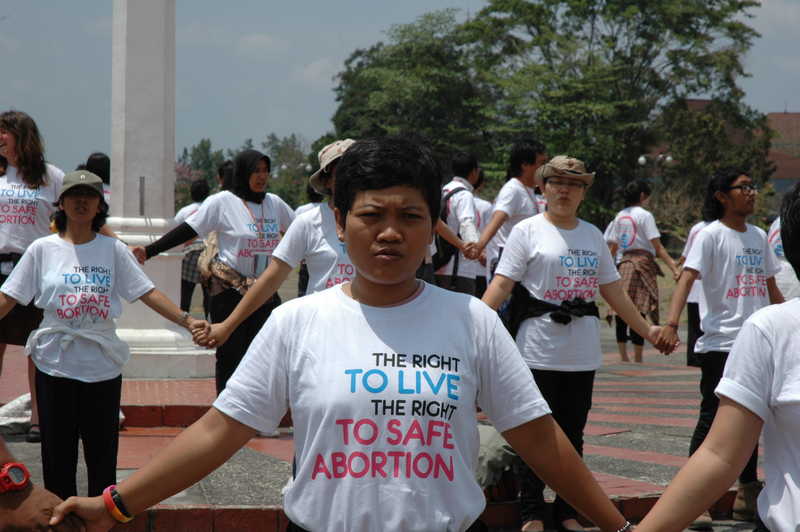 Over 130 people participated in a massive flashmob in Jogjakarta supporting access to safe abortion. The action publicized the number of the Samsara, the Safe Abortion Hotline, which gives women information on how they can use pills called Misoprostol, which can be bought in the pharmacy, to have a safe abortion by themselves in their homes.

If a woman cannot find misoprostol , she can email women on web, a online abortion service.

Over 2 million abortions are performed in Indonesia every year, and due to legal restrictions, most of these abortions are unsafe and risk the life and health of women. The UN has recently published a special report urging states to take away legal and financial barriers to guarantee women safe abortion services as part of comprehensive reproductive health. Asia regionally has the world’s highest abortion rate, of 25.9 million abortions annually, or over half the world’s abortions, and yet most Asian countries have restrictive abortion laws. About half of Asia’s abortions are unsafe, and unsafe abortion accounts for 13% of maternal mortality. Restricting abortion has been proven not lessen its incidence, but makes it more likely that the procedure be unsafe, often causing health complications or death, the most affected being poor and rural women, who have more barriers to access safer options. Access to Misoprostol and information on its use can drastically reduce maternal mortality associated with unsafe abortion. It has been proven safe and effective and women are capable of managing the process themselves.

The flashmob took place at 10.15 immediately following the opening ceremony of the 6th Asia Pacific Conference on Reproductive and Sexual Health and Rights (APCRSHR) at the Universitas Gajah Mada,Jogjakarta, Indonesia. After freezing in place wearing t-shirts saying, “The right to live, the right to safe abortion”, participants inside the conference moved outside to join a larger group holding a ten meter banner showing the hotline numbers and smaller banners reading “Stand with us”.
The mass action included representatives of Indonesian, Asian, and International NGO’s and many unaffiliated individual participants from Jogjakarta.