In collaboration with women's rights organisations in Guatemala, the abortion ship has visited Guatemala from February 22 till 25 th, 2017 to call attention to the violation of women's human rights caused by the restrictive abortion laws. Although Guatemalan law only permits abortion to save a woman's life, nearly 65,000 abortions are performed annually in Guatemala. Every year about 21,600 women are hospitalised and 660 women die from complications of unsafe abortion. These deaths are totally preventable by legalising abortion. On the request of the president of Guatemala himself, the military expelled the ship and the crew for violating public order, national interest and state security without any court order or other legal procedures. This unprecedented military crackdown shows that access to abortion is about fundamental freedom and democracy. Here you can read about the events that have followed since the Women on Waves ship has arrived in Guatemala. 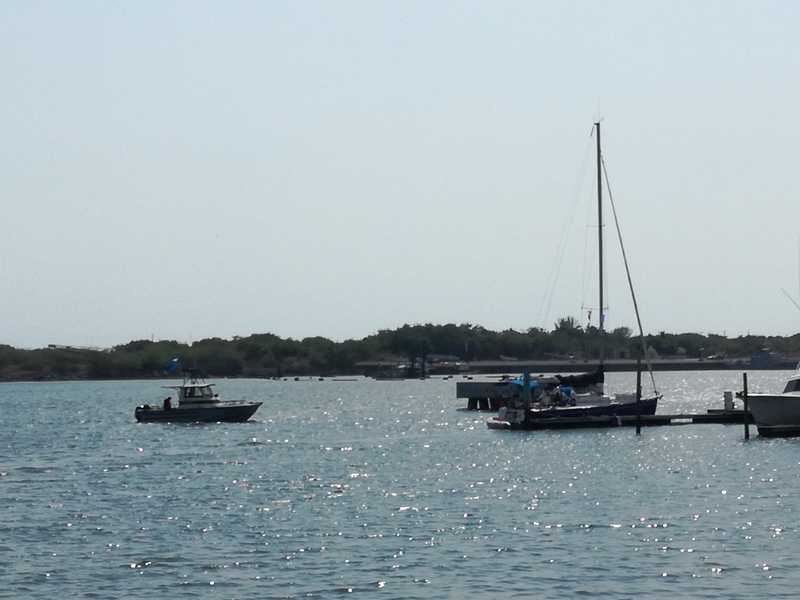 On Wednesday morning, the boat arrived in Guatemala, at the harbour Marina Pez Vela, where it stopped at the pier and got all necessary licenses and permits for the boat and the crew (see attached below), Daniel Evans, Merilee Nyland, Alicia Ott, and Seth Bearden to stay and sail out with the ship whenever they wanted.

At 11 o'clock the press conference to launch the boat campaign was scheduled at 11h at the restaurant of Marina Pez Vela (Guatemala). Around this time, the access to the pier had been blocked and closed with a lock so that no one could access the boat and the crew could not get out.

The hotline for women in need of a safe abortion started receiving calls.

The press started to publish articles and the news spread. The Congress voted a motion to include the abortion ship campaign on the daily agenda, which has been rejected. Meanwhile the Army hold a press conference and stated it would prevent the boat from sailing in and out of Guatemalan waters.  The army stated they would  monitor the boat and not let it go into international waters. The military said it was under instructions from President Jimmy Morales to not allow the activity. (see video press statement below)

Women in Guatemala City have been protesting in front of the Ministry of Defence, requesting the campaign to continue, the boat to remain in Guatemala and their right to a safe abortion.

Rebecca Gomperts, the owner of the ship tried to access the ship with our lawyer to make sure no violations would be committed by the authorities. They would not let the lawyer in and we had to force our way in.

Meanwhile the Ombudsman for Human Rights in Guatemala received an anonymous denounce that crimes may be happening inside the boat and came to the harbour to investigate it. At this moment Rebecca Gomperts, Director of Women on Waves, and Quetzali Cerezo, her lawyer, forced their way to be able to monitor the inspection and remain there. An inspector of the local harbours investigated the ship and made sure all required equipment was on board.

Rebecca Gomperts and the lawyer Quetzali Cerezo stayed on the ship while the Chief captain of the port brought a letter to revoke the licenses of the ship and an order to leave the harbour and national waters within 2 hours before 6 am. This letter was illegal as it did not mention the possibilities to appeal and it was not an official court order. When we mentioned this and refused to sign for the receipt, they withdrew the letter. So the licenses are all still valid. Nothing further has been confirmed until now.

In the night, the Military started driving around with the press for fear of violation of freedom of expression. A local group of Human Rights defenders contacted us, they wanted to start a court case.

At one o’ clock at night a local judge visited the ship on a boat to investigate if we were safe and what human rights were violated by the authorities. It turned out that a human rights lawyer filed the request for temporal provision for legal protection (Habeas Corpus) and to establish whether there were any violations of human rights. This request should be  decided  24 hours.

Many rumors and misinformation spread about reactions, legal actions and denounces.

Rebecca, Quetzali and the crew remained in the boat during the night. The press reported to us at that the military are stating that the boat has already left. The boat was still there.

The ship stayed and is still in the harbour but the crew is not allowed to leave the pier not even to get extra food and water.

The Habeas Corpus court case to establish the human rights violations should be decided today and Women on Waves is investigation how it can press charges against the Guatemalan authorities. We also learned that at February 23 th, a complaint had been filed against us for instigating  to commit a crime or provide an apology for a crime (MP001- 2017-19427) but we have not yet received the text of the complaint.

Many Guatemalan women continue calling the hotline to get information and try to schedule a visit to the ship.

Due to pressure from Human Rights organisations, the crew has been authorised to use the bathroom but only under escort of 10 guards.

Around 12 am, the crew have been notified by the department of immigration that it has decided to expel the boat and the crew from the country for violating public order, national interest and  state security.

In other jurisprudence people have up to 10 days to comply with this request but there was no time indication in the notification. (Article 92 and 93 of migration law). We are appealing this decision in court and the ship and the crew cannot be expelled before the court has taken a decision about the legality of this notification. The crew has not committed any illegal acts.

We are still waiting for the decision in the Habeas Corpus case.

So far more than 40 women in need of  safe abortion services called the hotline and many more have requested information on safe abortion procedures.

This morning we were able to talk to the crew as they now can leave the pier and go to the bathroom (what was a victory that took a lot of pressure and work!). They told us they are okay, but they never know if or when even this tiny freedom will be taken away from them. Every time they go to the bathroom, they are monitored by the military who are at the harbour at all times.

In the morning we went to the court in Escuintla to requested the decision of the temporal provision for legal protection (Habeas Corpus) that was filed on the 23 th of February. This request should be  decided  24 hours. We were informed that they never received the request from the lower court. So the court papers disappeared miraculously.

In the afternoon, at 2 o’clock the lawyers of Women on Waves filed their appeal against the expulsion order and requested for legal protection until the final court decision would be made.

In the judiciary we heard that the harbourmaster has pressed criminal charges on the request of the army for trespassing private and military property, which can be punished with jail.  When we requested the denunciation they claimed they could not give this information and that we could only obtain the documents back to the office in San Jose from Monday to Wednesday.

The combination of these 2 incidents; the “disappearance” of the first request of legal protection and the threat of a new complaint by the army, confirmed the fear of the lawyers that the legal system in Guatemala is corrupt and under a lot of pressure that we could not guarantee the safety of the crew anymore.

We all decided that the ship should leave as soon as possible to make sure the crew would not end up in jail.

At 4 o'clock we went to the harbour to bring the supplies to the ship for the voyage and initially we were again denied access to the harbour at the instructions of the navy.

There were several human rights observers and human rights groups were also present to make sure the crew would be able to leave safely. An observer of the local count said that  although it would be illegal to detain the crew at this moment  she could not guarantee their freedom and safety and that it would be better to just leaves and everybody started to get very nervous.

At 8.30 in the evening just before all the final papers were done and only 6 hours after we filed our appeal,  we received the decision of the court that  the request for temporal provision for legal protection was denied without any justification  (it only stated that it would not be advisable).  The fast extremely decision to not grant temporary protection in this case again confirmed our fear of the lack of the rule of law.  The final decision to the appeal to the expulsion still has to be made.

Human rights Violations committed by the Army of Guatemala

The  military intervention has shown that the right to abortion is not only about women’s human rights and health but fundamentally one of democratic freedom.

During the campaign the following human rights  violations were committed against our crew:

Outcome of the campaign:

In order to guarantee the future freedom to peace full protest and activism in Guatemala all participating activists agreed that it is very important to continue with the legal battle against the expulsion of the crew up the Inter-American court of human rights.

For Guatemalan women who need help

As the military intervention showed, it is now clear abortion is about fundamental freedoms. Women from Guatemala with unwanted pregnancies can keep calling the hotline 2278 6724 and can also send an email to info@womenonweb.org