On September 4th, Women on Waves celebrated the 10 years with a preview of the documentary in-the-making by Diana Whitten. Over 100 people from countries all over the world attended the event! 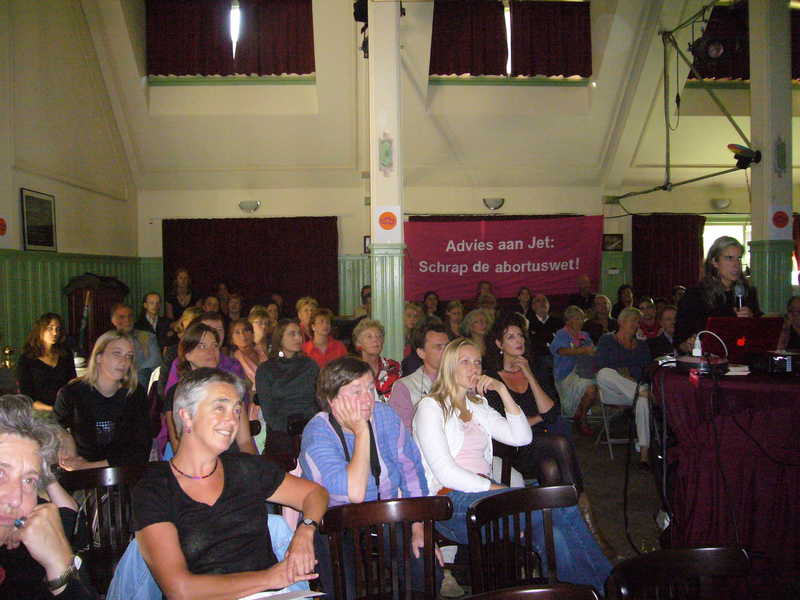 Women on Waves was founded 10 years ago with the aim to prevent unsafe abortions and unwanted pregnancies by providing sexual health services including early medical abortions with pills, on board a Dutch ship outside the territorial waters of countries where abortion is illegal.
In the last 10 years Women on Waves has created enormous public interest after successful ship campaigns in Ireland (2001), Poland (2003), Portugal (2004) and Spain (2008). The campaign in Portugal catalyzed the legalization of abortion in February 2007.
Unfortunately, in June 2009 the Dutch government changed the abortion law and claimed that the early abortion services Women on Waves used to provide legally on board the ship now fall under the criminal law. Women on Waves disagreed with this interpretation by the Dutch government.  The original law has since been upheld and Women on Waves has been able to continue its activities legally.

Although legalization of abortion is important, medical abortion with pills (misoprostol with or without mifepristone) now gives women the possibility to take their lives in their own hand again irrespective of the legality of abortion or the willingness of doctors. Scientific research has shown that women are able to do medical abortions themselves at home.  Making information about medical abortion easily available to women themselves can save women's lives. Therefore, Women on Waves now focuses on empowering women how to do a medical abortion safely themselves by distributing information through the internet, stickers, and by supporting the creation of safe abortion telephone hotlines through our partner organisations. Women on Waves started a telephone helpline for the first time during the campaign in Portugal in 2004 which continued to work until abortion was legalized there in 2007. Safe abortion hotlines have recently been launched in Ecuador (june 2008) and Chile (june 2009) after Women on Waves provided training and technical support.
Women on Waves will continue to train local women's organisations and support the launch of safe abortion hotlines and work in every other possible way to guarantee that women all over the world have access to information and medical abortions.

How can you help:

Help us distribute information about how a woman can do a safe abortion herself by printing the stickers from our website (www.womenonwaves.org/set-1540-en.html); taking them with you when you travel to a country where abortion is illegal and paste them in any public bathroom, waiting room, phone boots and other place you can think of.

You can also help with a donation, especially now your donation is much needed and very appreciated. For information about how you can make a donation see www.womenonwaves.org/set-427-en.html)