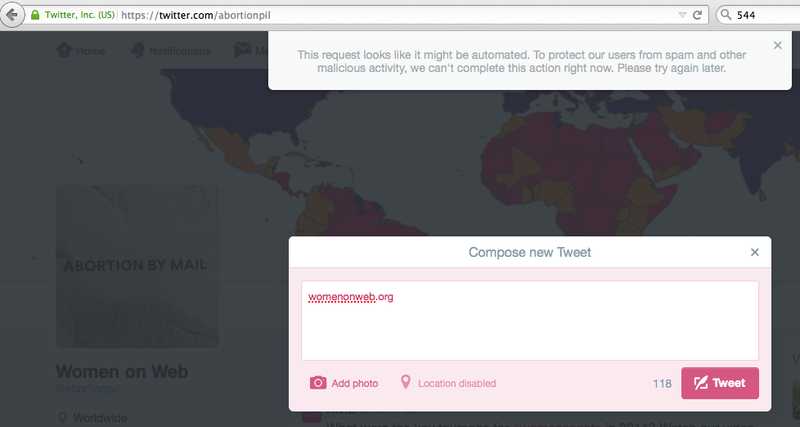 Twitter has disabled the possibility to link to the Women on Web website or to  tweet a link to the website. Women on Web was founded by Women on Waves in 2005, to respond to the urgent request for help for an abortion of women in countries where this healthcare service is not available.

Women on Waves is a charitable organization focused on women’s health and human rights. Its mission is to protect maternal health by preventing unsafe abortions. Women on Waves sails a ship to countries where abortion is illegal (for more information see www.womenonwaves.org). In 2005 it founded Women on Web, a telemedical service that supports women in countries where there is no access to safe abortion to obtain a medical abortion.

According to the World Health Organization, each year 42 million women have an abortion and half of these, 20 million, are illegal and unsafe. An abortion with pills is very safe and effective to do at home till 12 weeks of pregnancy. It is very similar to a natural miscarriage.  Millions of women have done abortions at home in United States and Europe and it is standard practice there.  The medicines are on the list of essential medicines of the WHO.

By removing the possibility to link to or tweet the website of Women on Web, Twitter has severely violated Article 19 of the Universal declaration of Human rights, the right to freedom of information as well as Article 10 of the European convention of human rights, the freedom of expression. WoW already filed a complaint but there has been no response from Twitter.