Press release December 20 th, 2012:
Consulate General of the Netherlands in Istanbul censors text about violations of freedom of expression in Turkey written for an artist publication by the director of Women on Waves, Rebecca Gomperts. This makes them complicit with censorship by Turkish regime. 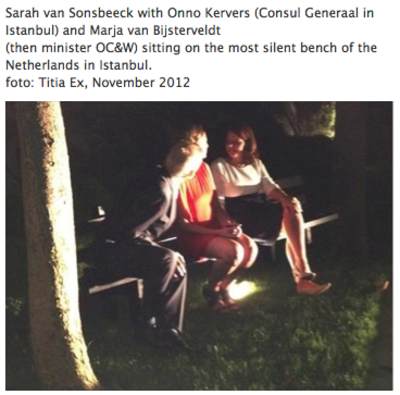 In an official statement of the Ministry of foreign affairs the consulate claims that that text was removed in consultation with the artist. However in an interview with the Dutch news agency nu.nl the artist says: "They suggested that it would be problematic and that they would not be able to support it (the book)." [2]

The publication without Gomperts text, as it was removed at the demand of the Consulate General of the Netherlands in Istanbul, will be launched Thursday December 20th 18:00 at the Stedelijk Museum Bookshop, Amsterdam.

The following text by Gomperts was censored by the Consulate General in Istanbul:

"How can you ask for silence when you actually offer a safe place to speak, here within but outside Turkey?

In no other country in the world are there so many journalists in prison, or is there such violation of the freedom of expression. As many as 5,000 criminal cases were pending against journalists at the end of 2011. Turkey increasingly filters opposition and pro-Kurdish media and imposes broad bans on websites. The government tries to influence court proceedings and uses pressure tactics to promote self-censorship. At least 76 journalists are in prison, 61 in direct relation to their work on terrorism or anti-state charges. Erdoğan himself publicly criticizes journalists and urges media outlets to discipline or fire critical staff members. He filed numerous high-profile defamation lawsuits. Turkey’s imprisonments of journalists surpass the next most repressive nations. Iran had 42 journalists in jail, Eritrea 28 and China 27. [3]

How can you ask for silence when so many Turkish women are silenced by force?

At least 42 percent of women in Turkey experience physical and/or sexual violence by their husbands or partners at some point in their lives. The very few women who are brave enough to report to the police are humiliated and send back to violent husbands or family by the Law enforcement officers. Turkey's family violence protection system is flawed and leaves women and girls across the country unprotected against domestic abuse according to Human Rights Watch. [4]

How can you ask for silence when the government of Erdogan plans to make abortion illegal? [5]

Four women who protested against the abortion ban have been taken to court and are charged with “assaulting police officers.” The prosecutor even demands up to three years in prison for the women.[6]

Are those that finally want to break the silence and self-censorship also welcome on the bench in the garden of the Dutch consulate?

Prosecuted journalists, battered women and those seeking a safe and legal abortion will occupy your bench in the Dutch consular garden and become political refugees. Because Consular premises are also inviolable according to article 31 of the Vienna Convention on Consular Relations, they could actually seek asylum on your bench in the consular garden as Julian Assange did in the Ecuadorian embassy in London.

So why would they remain silent? They will not only speak or shout, they will amplify their dissident voice. Article 35 of the Vienna Convention on Consular Relations protects freedom of communication on the part of the consular post.  Although it is not allowed to install a wireless transmitter, they can still use a megaphone or broadcast over internet radio from your bench, so that everybody in Turkey can hear them. They can say everything, and still be safe.  They can reclaim their human rights in Turkey from the bench in the garden of the Dutch consulate.