A new initiative by fashion brand Diesel to improve working conditions and to provide free abortion pills to its female factory workers could have been an appropriate gesture by Diesel. Diesel is one of the fashion brands that uses production factories that refuse to pay a living wage to their workers, violates their human rights and forces them to work in dangerous and unhealthy conditions. 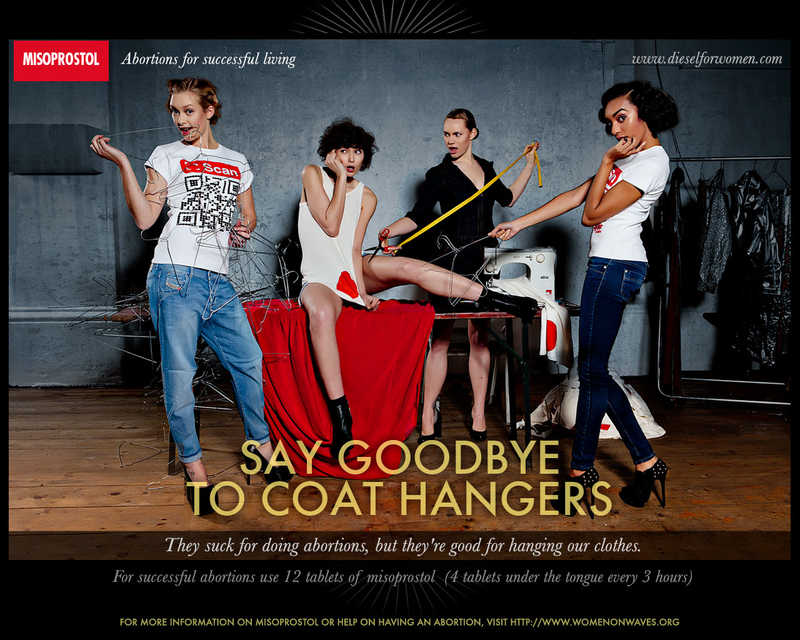 Misopolis (www.dieselforwomen.com) claimed to provide free abortion pills to its female workers in order to set them free and to create a fun factory.
This is, of course, a hoax, aimed at the garment industry to expose the violation of workers rights.

The hoax was devised by Women on Waves and Women on Web, both non-profit organizations concerned with women’s human rights and specifically with access to safe medical abortion. The organizations worked with the Yes Lab, which is a project of The Yes Men to help activist groups carry out media-savvy creative actions on their own.

In response to the hoax, Diesel send a letter threatening to take legal action, which was followed by a letter of the React group which is an organization in fighting counterfeit trade. (see the letters under press on the dieselforwomen.com website)

Women on Waves denies that it commits any infringements on any trademarks/copyrighted materials. Diesel for Women stands for fueling women’s rights.
Women on Waves designed the hoax to expose the violations of women’s rights that take place in the garment industry. The hoax is a parody on the PR campaigns and the reluctance to address human rights by the fashion industry in general and Diesel in particular. It intends to show that violations of human rights never happen in isolation and that the right to a safe abortion is connected with the broader framework of social rights, workers rights and the right to autonomy.
The website and content are thus protected by the freedom of expression as guaranteed in the Universal Declaration of Human Rights Article 19, "Everyone has the right to freedom of opinion and expression; this right includes freedom to hold opinions without interference and to seek, receive and impart information and ideas through any media and regardless of frontiers."

Approximately 30 million people are making clothes and textiles across the globe. Between 75% and 90% of workers in garment industry are women. Fashion companies hire subcontractors that employ female workers in a highly exploitative context. The women are forced to work in hazardous conditions that pose a threat to their physical health and violate workers’ rights, fail to pay living wages, with long work hours and no maternity leave. Female garment workers generally are young (average age 19), unmarried, with little education or training, no prior work experience, of rural origin and from poor families. The female garment workers run a high risk of sexual harassment and rape. Often young and from extreme poverty, the women do not have resources to protect themselves in the event that they are abused. They cannot speak out for their rights without risk of losing their job. Workers are not provided with a written contract and trade unions are forbidden. In May 2011 SOMO and the India Committee of the Netherlands released a report 'Captured by Cotton'. It proved that Diesel buys from suppliers that use the 'sumangali scheme’. Girls are being coerced to work in certain spinning mills and factories, with the promise of getting a big lump sum at the end of a 3 year period. This lump sum is actually part of their wage, which is below the legal minimum.

Most of the female workers in the garment industry live in countries where abortion is illegal, such as Sri Lanka, Bangladesh, Indonesia, Mongolia, Madagascar, Myanmar, Thailand, the Philippines, Morocco, Brazil, Dominican Republic, El Salvador, Guatemala, Honduras and Jordan.
Approximately 21.6 million women globally still have an unsafe abortion each year, resulting in an estimated 47 000 deaths, largely among the most vulnerable women such as poor, unmarried and, especially, young women. In addition to the women who die every year due to unsafe abortion, an estimated eight million women annually experience complications that require medical treatment.
Medical abortion is a very safe method to end a pregnancy. It can be done with the medicines Mifepristone and /or Misoprostol. Misoprostol is a medicine also available in countries where abortion is illegal. Both mifepristone and Misoprostol are on the list of essential medicines of the World Health Organization (WHO).

To support this campaign and women in need of safe abortions, please donate to Women on Web, and share by Facebook